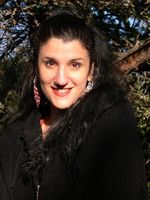 Abigail McBride is a musician and artist, based in Las Vegas.

Abigail McBride is a musician and artist, based in Las Vegas. Her latest album, Fire of Creation is a collection of her original music. Abbi is also a lead singer and percussionist for Zingaia, and part of the Sweet Ride to Heaven Jubilation and Wonderment Band in Las Vegas. Her recent solo release, Fire of Creation, has won critical acclaim. She travels worldwide, performing magic, belly dancing, and teaching drumming, chanting, movement and awareness workshops. She spends her free time as a massage therapist, gardener, chef and practices the art of levitation as lead assistant to her husband, magician Jeff McBride.